Once again it is time for another Question of the Month, an event happening each month which is hosted by Kim over at Later Levels, but this time around it is Luke at Hundstrasse who sets the theme with a simple question:

“Aren’t games great? And isn’t it even greater when one game spills out into another? So for this month’s question I’d like to know what the best gaming crossover is, and most importantly why?”

Sometimes you will find the likes of a character like Faith in a fighting game with many other memorable characters, or having the option of seeing other franchises from the same company when staying around the hub area, something you see happening in Starcraft 2. 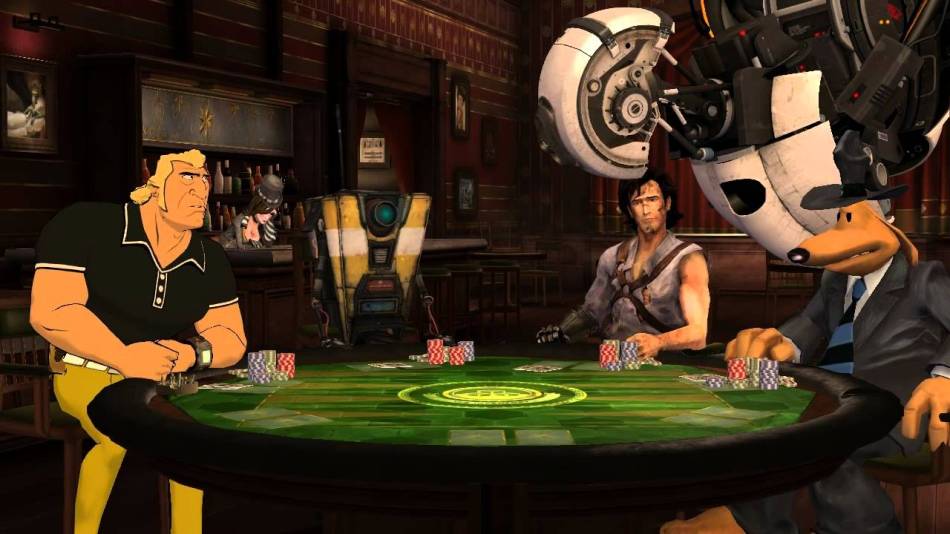 That is why this time around, instead of jumping into the simple choice of a fighting game, I will rather talk about a different type of game that we is played world wide with millions of players and viewers. What I am talking about…is a simple card game known as Poker. However, this isn’t any poker game we’re looking at, but instead one made by Telltale Games that gathers a bunch of memorable cast members for a night of playing cards with each other, as well as earning the chance to take some cash with you home. Welcome to the roster of a new challenger is; Poker Night at the Inventory 2.

Now, personally I am a sucker for smooth, relaxed environments which is why I enjoy Jazz and would rather sit at a bar, just sipping on a glass of whiskey while talking about life and other things with others. Of course while we also are playing board or card games, so it’s pretty clear that this was a game for me when it came out, and surprisingly you as the player are met at the table with characters like Venture Bros’ Brock Sampson, Borderlands’ Claptrap (or CL4P-TP), Max from Sam and Max with the added bonus of having Sam being there in the background, commentating as the game is progressing. Yet one other is also sitting down at the table with you…none other than the king himself Ash from Evil Dead and Army of Darkness, you know the guy with a motor saw for a hand and a double-barreled shotgun to take out nightmarish creatures from the Necronomicon, that for some reason has time to sit down for a game of cards. Plus who can’t forget the lovable and very sadistic GladOs being the judge of the game while taking a crack at the intelligence of the competitors, which also includes you.

To me at least, it feels like when you play a Final Fantasy game and get to see all your favorite summons in Final Fantasy XV, the many monsters that you can have as minions in World of Final Fantasy, having a roster of characters from the franchise to help you out in a pickle like in Brave Exvius…hell, I would even go as far as to say that just seeing these characters, gave me a sort of reminiscence that also happened when I fought recognizable bosses in Final Fantasy XIV.

There is the chance to complete objectives in which you earn a specific currency that enables you to buy cosmetic for cards, chips and even the table design. Granted there’s no microtransaction so you will have to do it all in-game.
So why is it exactly that this game is so good, well it’s the banter between the different cast members that you are playing against. As Poker Night 2 calls it out to you, it’s nothing more than an excuse to hang out with friends. They crack jokes at each other, talk about their different experiences up until now, referencing things that has happened in their previous games and in all what they thought about it. Also I have to point out that the game does a great act of making you getting invested in the game you’re playing, be it no-limit Omaha or Texas Hold ‘Em. Everytime the round gets to a close match when getting to the last two cards that are about to be revealed, you as the player get a close up of each character who hasn’t folded early in the game with their attitude and expressions as the percentage for one of you to win gets shown. No match is ever the same in how it gets played out, but everytime I get the exhilarating feeling of my stomach turning, heart beating loudly and sweat that gathers on the forehead, it’s like the time has slowed down as you wait for GladOs to reveal the very last card that might give you the win.

So which do you believe is the best crossover in a video game that you’ve played? Let me know down in the comments.
Also, don’t forget to read all the other entries at the main hub at LaterLevels’ website. There are many good ones this month, competing for winning as the best choice.
Stay Cozy and maybe I’ll see you at the table for some poker!