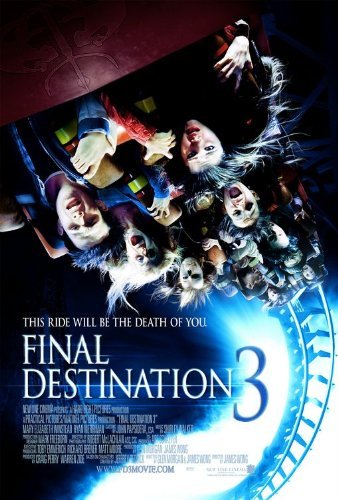 The story in Final Destination 3 is similar to the stories in the first two movies. Our main character, Wendy, and her classmates and other high schoolers are at a carnival. Wendy takes a lot of pictures of the students for the yearbook. At the end of the carnival Wendy and some of the other students are gonna ride the rollercoaster. Wendy gets a vision that it will crash and she freaks out and wants to get off the ride before it takes off. She and some other students get off the ride while some remain, including her boyfriend. The rollercoaster crashes and her boyfriend dies.

What annoys me about the story

There are two things in the story I am not fond of. First, in the vision that Wendy gets it looks like the rollercoaster crash happens or at least starts because of a video camera. The character with the video camera gets off the rollercoaster before it takes off. Of course the crash could have happened regardless but it still seems weird to focus on that part in the vision then.

The second thing that annoys me is the ending. It is a bit similar to Final Destination since there is a time skip. Usually I don’t mind time skips in movies but why would Death wait 5 months to try to kill the remaining characters? I simply don’t get it. Other than this I like the story. It also contains one of the deaths I find most horrible in all of the Final Destination movies.

The acting and characters

I don’t feel like the acting is as spot on as with the first two Final Destination movies. I am not feeling as sorry for the characters when they die as in the first two movies. There is one character that I really like in Final Destination 3, though, Ian McKinley. He is a bit of a know-it-all and is thus meant to be annoying, but I like him. The rest of the characters I don’t care much for. However, they represent a broad range of personalities, which I think is good.

In Final Destination terror was the emotion I felt came through the strongest. Grief was used a lot in Final Destination 2. For Final Destination 3 guilt is very present with the main character. She believes she could have done more to save her boyfriend. I like the variation of emotions so we don’t end up getting the exact same feeling over an over again.

It is not a Final Destination review if I don’t mention the camera work. I love the intro to Final Destination 3. The Final Destination melody is playing and the camera is overlooking the carnival. Then it zooms in on some of the rides and objects that are typical for a carnival. It is a very creepy atmosphere. One thing I do miss is Death’s shadow when zooming in on certain objects. It is like Death has disappeared a bit from the scenes. There is also less object-zooming during the movie and the objects are often more relevant to the characters’ death.

The sound and lighting

The scary sound of the Final Destination melody kicking in at the beginning of the movie gets me everytime. Already from the start of this movie I am sitting with a feeling of uneasiness. The background sounds and music is as good as in the first two movies. I also like how they have thought about music choices during the movie. One of the songs that you can hear playing is called Love Rollercoaster by Ohio Players.

One thing I am missing is the shadows of Death and all of the warning signs played out by the lighting. It was very well done in the first two movies but in Final Destination 3 it is like it has vanished. Death doesn’t feel as present in the movie as opposed to the first two movies. That makes this movie less creepy.

Other things about Final Destination 3

One thing I really like in Final Destination 3 that is different from the first two movies, is the photos that Wendy takes for the yearbook. Why do I like that? Well, they give clues as to how the characters might die. The same rule about the order of the deaths applies as in Final Destination but the main character has been given clues instead of only hunches about the deaths.

One thing they could have been more creative with would have been the various deaths in the movie. They don’t seem as inventive as in the first two movies.