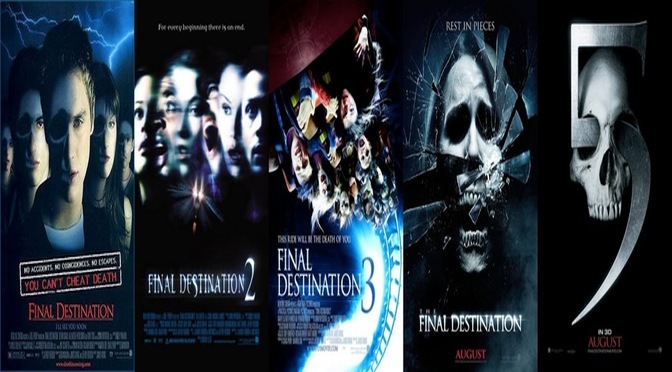 Warning: Will contain spoilers for the Final Destination movies

Now I have come to the end of the road. All five Final Destination movies have been reviewed and time has come for my final thoughts and opinions.

Flight 180 in the Final Destination movies

There are even more minor Easter eggs hidden in the movies. I remember an example from Final Destination 5, where the Flight 180 accident hasn’t occured yet. On a street there is a café sign saying Le Cáfe Miro 81. This is where Sam the main character of Final Destination 5 worked. Turn it around and it says 18o. Le Cáfe Miro 81 can also be found in Final Destination at the end when the three surviving students are in Paris. They celebrate at the restaurant because they think they cheated Death for good. Unfortunately the sign saying Le Cáfe Miro 81 breaks loose. It swings down while it turns itself around, so it reads 180, and kills one of the remaining students, Carter.

The mortician in the Final Destination movies

Theories about the mortician

So why is he an interesting character? The mortician, also known as William Bludworth, is one of the if not THE most discussed character for all the Final Destination movies. There are theories that he is the personification of Death and I have had that thought myself after I watched the movies the first time. However, the producers have confirmed this to be false. There is another theory though, which I believe in. William Bludworth is Death’s assistent. Since he knows everything about Death and Death’s plans it seems to be plausible. Even though Bludworth warns the survivors of Death and gives them advice, it is as if he knows they will not escape it.

William Bludworth talks very cryptically and another theory goes that he doesn’t actually want the survivors to live. This might be because his advice doesn’t really work, or at least not as the survivors interpret it. In Final Destination 5 Bludworth tells the survivors that if they kill someone they would take that someone’s place in life and live as long as the person they killed would have.

Nathan, one of the survivors, then accidentally kills one of his co-workers, Roy, and it seems as if the rule works. Unfortunately Roy only has a few weeks left to live. So technically it seems like the rule applies, but you should know who you kill. If Nathan had known that Roy had a blood vessel in the brain that was about to burst he would have known Roy didn’t have much time left. So I don’t know if I believe in the last theory but Bludworth does make his advice difficult to understand due to the way he talks.

I could go on and on about Bludworth but the bottom line is that there are a lot of theories about him and more to him than we see in the movies. Again, I believe him to be Death’s assistent, giving out cryptical advice that may or may not work.

The visions in the Final Destination movies

There are more visions than the five major ones, though. In Final Destination 3 Wendy, the main character, gets a second vision at the end of the movie. This time it is too late though, and she dies afterwards just like the vision predicted. Almost the same thing happens in Final Destination 4, where the main character, Nick, gets another vision toward the end of the movie. He has time to intervene here, however, and so it doesn’t end after that second vision. During the movie Nick also has minor visions containing hints to how the survivors will die.

The deaths in the Final Destination movies

I love how creative the deaths are in the Final Destination movies, also in Final Destination 4 even though they are the least creative. It is one of the reasons to watch the movies – to witness the interesting and at times funny death scenes. I have my favourite deaths and I have the ones I find most horrible. I will mention two of the horrible ones and one of my favourites.

Firstly, the eye srugery that happens in Final Destination 5. This might be due to me soon having one of the eye surgeries myself. But also when it has something to do with eyes I don’t like it. I find the death interesting because it looks so horrible. Secondly, I love and hate the deaths of Ashley and Ashlyn in Final Destination 3. They die because they went tanning in a tanning salon. That one really feels horrific.

One of my favourite deaths happens in Final Destination 2. It is Evan’s death and the reason it is one of my favourites is because I find it funny. He comes home to his apartment and he throws his leftover food out the window. Spaghetti with ketchup it seems. He recently won the lottery but still likes to eat spaghetti and ketchup apparently. Some things then happen in the apartment that starts a fire and he escapes by using the fire escape. The lower part of the stairs on the fire escape is stuck and he then jumps down. He then manages to slip in the spaghetti and lands on his back. Then the last stairs of the fire escape comes down and goes through his head. I just find it so hilarious that he technically died because of his leftovers.

One thing I find interesting when it comes to the deaths is that in Final Destination 2 Tim’s and Nora’s deaths probably wouldn’t have happened the way they did. Tim and Nora only die the way they do because the other characters interfere. Tim only chased after the pigeons because Kimberly yelled out “Pigeons!”. Nora only freaked out about the mannequin arms because the others called her and warned her that a man with mannequin arms would kill her. If those two things hadn’t happened Nora and Tim would probably have died in other ways. One thing is sure – they would have died regardless.

Other things about death

In Final Destination 2 William Bludworth mentions that new life might be able to save the survivors. The survivors interpret this wrong at first, but the main character Kimberly finally realises what it means. When it is her turn to die she drowns in a lake but is revived by a doctor. She and another character survives the movie.

Another thing I want to mention about the deaths is in Final Destination 3, my favourite character Ian McKinley asks that if the last person to die were to kill themself would they prevent the other deaths. It is not answered in the 3rd movie but in Final Destination 4 one of the survivors tries to kill himself but it is not his turn to die. Thus Death doesn’t want him to kill himself and he fails all his attempts. So apparently suicide doesn’t seem to be an option.

I have already mentioned the whole kill or be killed dilemma from Final Destination 5 where if you kill someone you take their place in life. I love this advice that William Bludworth gives. It is a great dilemma that the remaining survivors suddenly stand before. Can you kill someone so you can live? We see that it seems to work for Nathan. We don’t get confirmed if it worked for Sam though. So can the advice truly be trusted, we don’t know. In truth Nathan’s turn could have just been skipped like it happens in Final Destination.

We are nearing the end

At the end here I just wanna say that I am a big fan of the Final Destination movies and how they are linked together. I love going into details about the movies and talking about them. Thus it has been my pleasure to take you along as we have gone through five reviews and now my final details and opinions about the movies.

We have been through an airplane crash, a traffic crash, a rollercoaster crash, a speedway crash and finally a bridge collapse, and we have survived. But beware; Death doesn’t like to be cheated.

Stay Cozy and have a killer time while you can!

2 comments on “The Final Destination movies – My final thoughts”