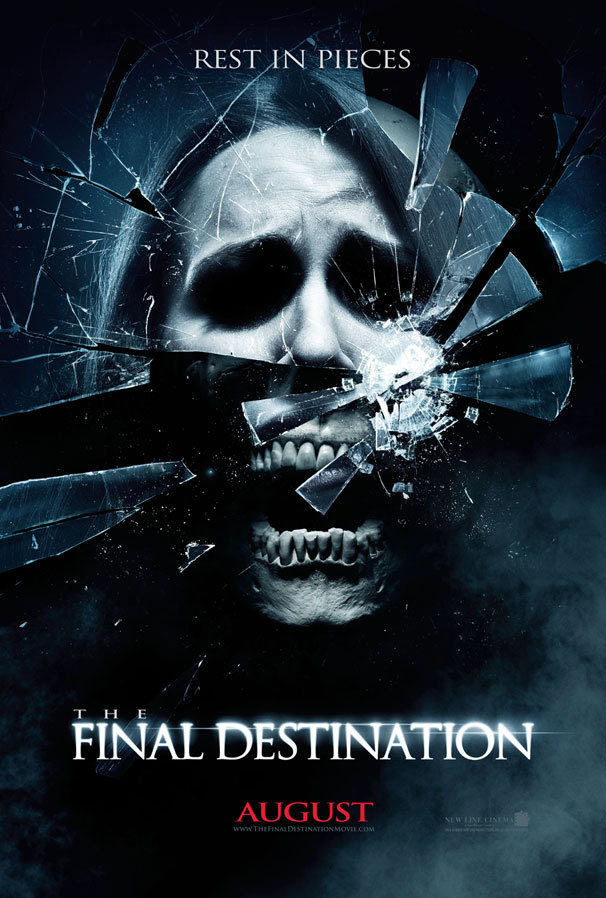 Final Destination 4 has a story that resembles the other movies’ stories. Nick, the main character, and his friends are at McKinley Speedway stadion watching a race. He gets a vision that the cars are gonna crash and they are all gonna die. Nick and his friends and some other characters gets out of the speedway stadion because Nick yelled that the cars would crash. Of course they don’t believe him until it happens and one of the characters outside the stadion dies almost immediately after. Death’s new design has begun.

The story is very similar to the rest but you hear less about Death’s new design than in the first three movies. Nick of course figures out that the whole vision thing has happened before. Flight 180. I like how flight 180 is present in all of the movies. That way the movies feel connected more than just by title. At the end of the movie there is a time skip. It is the only time skip in the Final Destination movies I haven’t disliked so far. This is because the time skip is only two weeks as opposed to several months. I can accept that Death will wait a few weeks.

The acting and characters

The sound and lighting

I am disappointed that the Final Destination melody used in the first three movies wasn’t used here. The melody usually kicks in at the start to make the whole beginning eerie. In Final Destination 4 the music is completely different and I don’t get the uneasy feeling I got from the first three movies. That is a shame. Even at the end I don’t have that feeling. Though during the movie I did get goose bumps on my arms because of some very horrific sounds, I will give them that. The sounds coming from the various objects and machines in the movie are good.

The lighting is as good as in the third movie. There are still not really any signs that Death is closeby except for some wind one time. The shadow of Death is definitely gone.

Other things about Final Destination 4

I like that the mechanism to figure out how the characters will die has changed once again. In Final Destination 4 Nick gets visions throughout the movie with clues as to how the characters will die. This is an interesting detail since it is only Nick then that can tell the others what to avoid. I also like all the small Easter eggs about flight 180, which has been in all of the sequels, but I noticed them a lot more here.

The creativeness of the deaths is on the same level as in Final Destination 3. Except for the deaths in the big accident – those varied quite a bit. Some of the following deaths were done fast and I miss some of the slower “death mechanisms” from the first two movies.

Average. It doesn’t quite cut it for above average like Final Destination 3 since I don’t get the uneasy feeling and the acting isn’t as good. I also really miss the more detailed death scenes and something in the story to make it stand out more. I will still recommend that you watch the movie just once if you love the Final Destination movies. Just be prepared that it won’t give you the same feeling that Death might be near as the other movies.